Made in the UK

This mount has a modular head bracket which various light, camera, battery modules can be added and attached too. The insert on top is also replaceable in case of a breakage or you decide to change computer brand. A range of add on modules are available to suit Gopro fittings such as Exposure Light fittings and Universal Light fittings.

Please note this mount is only supplied with a computer insert. All modules such as GoPro, Exposure mounts etc are optional. 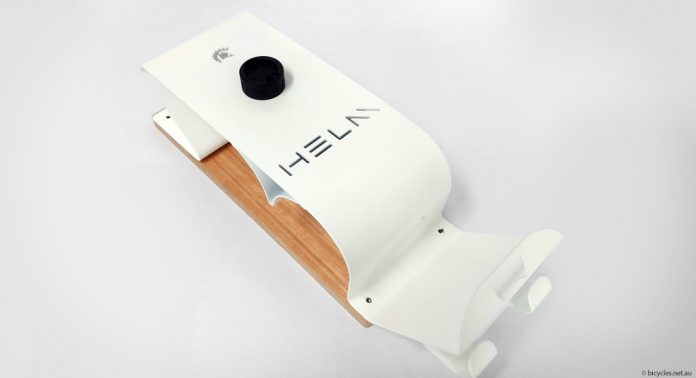 In an era where a quality road or MTB helmet will cost you upwards of $150, you might not want to be just throwing them in a drawer or risking them getting damaged by leaving them on a shelf or hanging on your handlebars. Those nice sunglasses you upgraded this summer? Probably another $100-$300 that you don’t want to have to replace in a hurry. Two bidons? Maybe $40 between them, I found out the hard way that you can step on them and destroy them. If you’re like me, you have bike gear in different rooms and sometimes the garage. Maybe you know all about fishing around in the dark for your bike gear and trying not to wake up others. Enter the HELM Velo Caddy from BSpoke Velo Australia.

Hand made in Melbourne, the HELM wouldn’t look out of place in those European design store that seem to proliferate in most capital cities outside Europe. The unit is a black or white powder coated assembly of bent steel plates with a birch ply backing plate. The most complex part is the 3D printed mount (Garmin or Wahoo fitting available) that attaches to the upper part with two bolts and dome head nuts. It may be clichéd, but this is more than the sum of its parts.

BSpoke Velo, previously known as Full Beam Australia, import a range a great quality brands and the HELM is brand new, a product they developed and produce in Australia. I didn’t ask, but the word Helm has a number of meanings in German which orientate about being in control. It also translate to helmet so turns out to be a very fitting name. And check-out the profile cut into the metal like a Roman soldier but also with chainring headdress.

But how does the HELM go when the screws meet the walls? Pretty well, in fact. Installation can be very simple, but will depend on your mounting location.

For me, this was installed onto the side of a shelf unit that sits in the room where the bikes are kept. As simple as two pilot holes and screwing the plate to the side of the shelves. The supplied spirit level is a nice touch to help ensure you mount it straight. I guess the worst that can happen is your bidons slide out of it, but if you can screw it up that badly, then DIY is not your thing. Once that’s done, the four smaller bolts fit into the nuts in the pre-made plywood plate and the whole thing is up within minutes. You won’t need 50mm deep wall plugs for this sort of weight, so installation into stud walls or brickwork shouldn’t be tricky. As the instructions point out, your walls are your issue, so do a little research into your walls and what would be the best fastening system.

Then, just load it up. Easy. Two bidons, a Garmin, sunglasses and a helmet in one spot, making good use of vertical space. This is where the ‘sum of parts’ cliché comes in. To install a hook for a helmet or clothes is easy. Installing an additional shelf for the rest is not as straightforward, but not difficult. But to do both can eat up a lot of wall area.

This is what made me realise: the best part of the HELM idea was the use of depth. Bidons and sunglasses, things that aren’t the easiest to hang up on hooks are now part of the set and ready at hand without spreading out. The Gamin/Wahoo mount on the front is an element that adds to the planning involved. While Garmin and Wahoo are the current options (though they are quite widespread throughout many manufacturers as standard fitting) to choose from, if you were inventive enough and had some obscure mounting system you could perhaps 3D print a different mount as you needed.

The helmet sits a little forward on the unit, so getting some air around it if you’ve been sweaty is helpful. I generally leave my helmet in the sun for an hour after a ride to dry out, as I usually keep it in a cupboard. I might be able to stop doing that now if the air flow through the helmet while hanging on the HELM is good.

Update: Anthony from BSpokeVelo pointed out that the two discretely placed hooks on the bottom can be used to hang hats, jackets and gillets. And near these hooks at the bottom (and discretely positioned) is a bottle opener… so no need to use your spokes to crack open a beer.

At $199 this is a premium category product. Hand-made in Melbourne goes a long way to differentiate this from anything ‘run of the mill’, not to mention that these type of space-savers are not very common. The big selling point is that it is a thoughtfully designed solution that will look good in your apartment or house and keep your bike essentials neat and accessible.